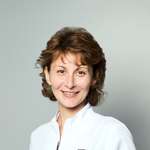 Education:
In 2000, she graduated from the St. Petersburg State Medical Academy named after I. I. Mechnikov with a degree in Medical Science»

From 2000 to 2001, she completed an internship in the specialty "Therapy" on the basis of the State Clinical Hospital No. 2 in St. Petersburg

In 2003, she completed primary professional retraining in the specialty "Gastroenterology" with the certificate of a gastroenterologist on the basis of the Military Medical Academy named after S. M. Kirov.

Work experience:
since 2006, he has been working in the State Budgetary Institution of the Moscow State Scientific Research Center named after A. S. Loginov DZM

Scientific activity:
With the materials of scientific work, she spoke at Russian and international congresses on gastroenterology, inflammatory bowel diseases

He has more than 5 printed works. Participates in clinical trials