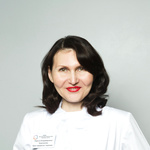 1992-1994. military doctor of the MPP 852 separate training automobile battalion of the Kovrov Tank Division of the Vladimir region.

1997-1998. doctor of the OMedB of the Kovrov Tank Division of the Vladimir region.

2001-2008. Head of the Cardiology Department of the Chkalovsky Military Hospital of the Federal State University "1410 VG VVS", Moscow region.

2009-November 2016 doctor of cardiology of the cardiology department of the GBUZ MCSC DZM.

November 2016 - currently a general practitioner of the reception department of the Moscow State Medical Center named after A. S. Loginov.

Co-author of the book: "Modern approach to the study of the pathogenesis and treatment of cardiovascular diseases and the influence of factors of earth and space weather (chronobiology and chronomedicine in cardiology, gender features of therapy, pharmacoeconomical analysis)".

In 2015 - approval of the topic for the degree of Candidate of Medical Sciences, in April 2016 - defense of the candidate's thesis.

Professional interests: study of the influence of earth and space weather factors on the course of arterial hypertension in elderly patients, chronomedicine, gender approach to the treatment of hypertension, CHD.