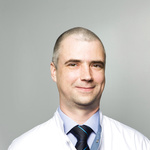 Doctor of the first category.