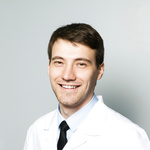 Experience:
Since 2017, he has been a surgeon in the Department of High-tech Surgery and Surgical Endoscopy.