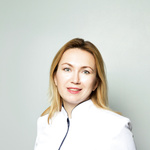 In 2007, she graduated with honors from the Medical Faculty of the St. Petersburg State Medical University named after I. P. Pavlov, majoring in "Medical Science".

From 2007 to 2008, she completed an internship in the specialty "therapy" at the St. Petersburg State Medical University named after I. P. Pavlov.

In 2008, she underwent professional retraining in the "cardiology" cycle at the Institute of Advanced Training of Doctors of the State Institution "National Medical and Surgical Center named after N. I. Pirogov of the Ministry of Health of Russia".

In 2013, she completed professional retraining in the "functional diagnostics" cycle at the Russian Medical Academy of Postgraduate Education, Moscow. From 2013 to 2017, he studied at the graduate school of the A. L. Myasnikov Institute of Clinical Cardiology of the Federal State Budgetary Institution RKNPK of the Ministry of Health of the Russian Federation, Moscow.

since 2009, he has been working at the State Medical Institution of the Loginov Moscow Medical Research Center (DZM) Certificate in Cardiology, certificate in functional diagnostics

He has more than 10 scientific publications.