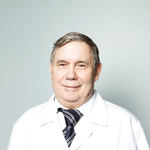 These achievements of A. I. Parfenov were awarded the prize of the Government of Moscow.