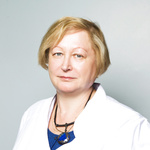 Moscow Medical Dental Institute  in the specialty of medical science (1975).

Since 1979, he has been working at the Central Research Institute of Gastroenterology.

In 1990, he defended his PhD thesis on the topic: "The state of the intrasecretory function of the pancreas in patients with chronic pancreatitis".

In 2009, he defended his doctoral dissertation on the topic: "Clinical and pathogenetic mechanisms of the development of external and internal secretory insufficiency in chronic pancreatitis".

Doctor-gastroenterologist of the highest category.

Member of the European, Ukrainian and Russian Pancreatic clubs.

Clinical work: diagnosis and treatment of diseases of the digestive system.