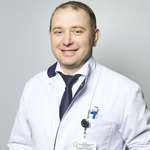 2004-2006 Assistant of the Department of General Surgery of the Moscow State Medical University (clinical base: Oncology Department of the N. A. Semashko Road Hospital, Lublin)

2010-present-Associate Professor of the Department of Surgery at the Lomonosov Moscow State University.

2013-present Head of the Department of Liver and Pancreatic Surgery

International Association of Hepatopancreatobiliary Surgery of the CIS countries

For the first time in Russia, he performed laparoscopic anatomical resection of the liver (bisegmentectomy 2,3)

Publications in the professional press: 77 printed works, including 2 chapters in monographs, 2 monographs on surgery