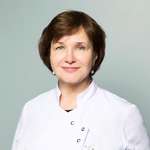 Title: doctor of Medical Sciences, doctor of the highest category, Honorary Professor of the MCSC named after A. S. Loginov

- co-authored more than 200 scientific papers, received 3 patents for the invention, published two monographs "Spontaneous bacterial peritonitis" and " Primary sclerosing cholangitis. The view of the therapist and the surgeon»