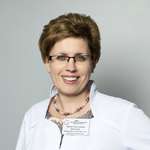 Academic degree: Candidate of Medical Sciences, in 1995 he defended his PhD thesis on the topic: "The effect of levo-carnitine on the chronostructure of hemodynamic parameters, lipid and protein metabolism in patients with cardiovascular diseases of the elderly and senile age".

Diabetes mellitus, including those with late complications at various stages; selection of tablet-based hypoglycemic therapy, transfer to insulin therapy, correction of the regime and doses of insulin administration, management of patients on pump insulin therapy;

Author of more than 40 scientific papers, author of the monograph "The effectiveness of metabolic therapy in elderly patients with coronary heart disease", Medpraktika-M, 2010.
Co-author of the textbook "Fundamentals of classical electrocardiography", BelSU, 2010.

International activities: She has participated in international conferences on several occasions.