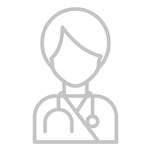 Education:
From 1997 to 2004, she studied at the Russian State Medical University, majoring in pediatrics.
From 2004 to 2007. residency at the Central Research Institute in the specialty of gastroenterologist.

Experience:
Since 2007 I have been working as a gastroenterologist at the Central Research Institute of the Russian Academy of Medical Sciences, since 2014 - at the MCSC named after A. S. Loginov.